You have no items in your cart

FREE 1-4 Day Shipping on ALL orders!

Hydraulic Hitch-Mount Crane mounts in the 2"-inch. receiver hitch of your vehicle to make loading and unloading of bulky and heavy equipment safe and easy. No permanent installation or drilling is required. Just install it on the hitch when you need it and remove it when you’re done. Load is supported and distributed to a adjustable legs of the crane to prevent overload on your vehicle's hitch receiver.

It's not too bad. I had to weld some braces, and plate for the foot brace to make it more stable. We'll see how good it does lifting an engine and rear axles. 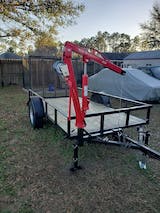 Price ain't bad,,, quality is meh ,, I did a few modifications ,, rewelded a couple joints shortened the hitch box tube added a few gussets and magically it handles 700 lbs with out any issues so far ,, the winch and cable aren't being used I'm using it as a engine hoist,,,, picks up a half dressed 4.0 jeep engine with no issues so far and will do it in the 250 lbs or the 500 lbs positions ,,, not a bad deal if you can weld

I really liked everything about it.

R
Russell C. Fennick
The bearing for swinging the unit is 30306.

I don't like the exposed bearing used to swing the crane. Working in the woods and dirt, the bearing gets contaminated easily. I wanted to buy a spare before I accidentally ruined the original, but nobody knew what the part number was. So, I ended up taking the bearing off to find the number, which is 30306. Now I have a spare cup and cone, just in case, so I do not lose any production.The rear sheave for the winch also did not have any form of keeper to hold the cable in the groove. If you do not pay attention, you can ruin your cable. This was fixed by adding a crossbolt, just as the front sheave has.All in all, this crane has saved plenty of sore muscles and more than paid for itself many times over.

P
Patriot Rising
Great lift for the money, but ....

For the money this is an excellent hitch mounted hoist! Keep in mind "for the money." This is the only hoist I've ever purchased, but I have seen others up close. I purchased mine as others did to remove and reinstall a 5th wheel hitch in the bed of my truck. The materials seem to be easily strong enough to lift it's load limits at both the 250 and 500lb positions. As noted by other reviewers, it does come up short in a couple of areas. First, as you can see in a couple of photos some nylon spacers would have been a very inexpensive parts improvement for the function of the lift. If you don't have the spacers on hand, and you don't want to wait assembly until you can purchase them, it hardly seems worth the trouble of retrofitting the lift. Also, on the front wheel where the cable exits the boom, a pulley with a retainer would keep the cable from jumping off the wheel, which it does relatively easily when a load isn't present. The other option would be to do what another reviewer did and that would be to place a bolt through the boom just above the wheel close enough to keep it from jumping its track. CAUTION: Be careful not to drill too large of a hole in the boom. I'm not an engineer, but every additional hole which is drilled in the arm, potentially weakens the boom, and would most likely void any warranty,or legal claims for damages or injury from the manufacturer. That said, this is still a great lift!Also, as noted by everyone else, there are no instructions for assembly, which is crazy! It would be so simple for the manufacturer to include instructions for assembling the lift. Maybe it's a way of avoiding liability, but to me it's just negligence on their part. But, I'm no attorney, so maybe it's just an oversight, however, with all of the reviews noting this difficieny, it would be so simple to rectify. I've included a photo of the exploded diagram of the parts which is included. Couple of problems with this diagram as well: 1. It lacks detail. Most parts are obvious as to their location or positioning, but there are several instances where the parts and/or their position aren't clear. Several times I had to reverse course and remove and reinstall parts in their correct position. For most individuals that would be purchasing a lift to begin with, assembly won't be difficult, but it would be so much easier with instructions and even a second sheet with black and white photos of those areas which could use more details.One plus on my lift which other reviewers noted as problematic is the spooling of the cable on the winch. Others complained of their cable being a rats nest, or like a backlash on a baitcasting reel, however mine was perfect. However, it was loose, so I simply had to unwind the winch carefully to keep from creating a backlash, but it wasn't a big deal at all. The one thing I noted was that even though I tried to load the cable under hand pressure to simulate a load, when it came to actually picking up a a load, it pulled the cable deep into the other wrappings of the spooled cable. I'm hoping this doesn't become a problem with future use.All things said, this is a great lift for the money. It worked exactly as planned! Another foot of arm on the boom would have allowed me to lift the hitch and drop it exactly back in to place, but lowering it into place leaves me a foot short. I was able to lift the hitch without any issues out of its brackets, however, I will have to manhandle the hitch back into place. Prior to this purchase I had to call my son and son-in-law to help with lifting this hitch into and out of the bed of my truck. The 5th wheel hitch used in my longbed truck was heavy, but I was always able to lift it on my own from the ground to the truck bed. However, with a shortbed truck I was forced to go with a slider hitch, which is a beast! It was impossible to even lift it off the ground. So, now I should be able to load and unload the hitch by myself. I named my new assistant D2M2, representing the initials of my son and son-in-law. 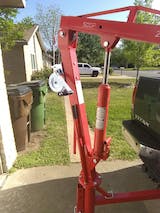